Radio 5 Live have just played part of an interview (presumably the Dermot O'Leary one) where Morrissey says that the Royal Family are benefit scroungers. Nicky Campbell commented "There goes his Knighthood!".

May be worth listening to Radio 5 Live, as I got the impression they were going to play some more.

The singer and songwriter Morrissey has told the BBC he believes the Royal family are benefit scroungers who do not speak for England.

"Why would I watch the...
Continue…

Looks like the interview for 30th April has already been recorded. 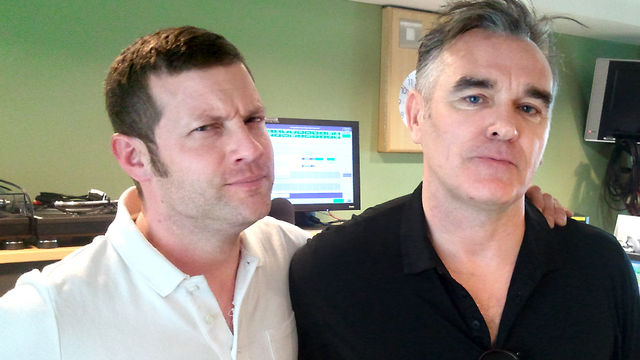 "The Very Best of Morrissey" is out now in the UK. Perhaps not surprisingly his worst performing single ever, and his third successive single to miss the UK Top 40.

This is big news in my world. Soundsville Paul, hitherto off-radar, has surfaced and seeded a cassette of the Troy Tate sessions taken straight from the master.

It's a big upgrade on anything I've heard before.

...I'm sure most people here know the background of this, but just in case...

The Smiths recorded demos at Decibel Studios and Drone Studios in 1982, then signed to Rough Trade then recorded a couple of singles in Strawberry Studios. For the first album, Rough Trade hired Troy Tate to produce and recorded the album in Elephant Studios. Despite completing the album the band weren't happy with the sound and re-recorded the whole album again in London with John Porter producing.

Morrissey to duet with Mary Coughlan?

Tom Dunne interviewed Mary Coughlan today on Today FM for a piece called "My Life in Music" and at the end he mentioned that off air she had said she may be doing a duet with Morrissey....after which he played The More You Ignore Me The Closer I Get...here's hoping, at least confirms new tunes are more than likely in the offing

Morrissey autobiography discussion in the media

Following the news from the "Front Row" Radio 4 interview, some additional coverage:

Link posted by Nats1977 in the forums (original post):

Morrissey confirms he's finished his autobiography - NME.com
The book will be out within a year, former Smiths man says

Link posted by WhalleyRange in the forums (original post)...
Continue…

Interesting comment from Bernard Butler, ex-Suede, in this month's Mojo. Referring to his dis-interest in re-unions he says:

I've always told Johnny [Marr], Don't reform The Smiths. Morrissey would do it at the drop of a hat, and he'd have Rick and Bruce, as he calls them, in cages at the back."
Click to expand...

I've no idea how well Bernard knows Moz or Johnny, but it's interesting that he reckons Moz could be so easily persuaded to get up on stage with Andy and Mike again.
Continue…

Strange/unexpected Moz references?
FWD.
17 minutes ago
Famous when dead
Morrissey A-Z: "I Will See You in Far-Off Places"
I thought this track improved via its live incarnation and took on a...
23 minutes ago
Famous when dead
Painting and Drawing
I'll try to make a better video tomorrow, where you can see better, what I'm...
43 minutes ago
Light Housework
Joshua James Richards mentions Morrissey at...
I don't know!
Today at 5:56 AM
Nerak
An REM thread for r.e.m. stuff
Hi all, this is my first time posting on this thread. I've used it for a...
Today at 5:14 AM
honkybach
morrissey frink thread!
These days í find his stigmata pretty adorable also. .
Today at 3:51 AM
joe frady