See the sidebar where Meat is Murder is featured.

Meat Is Murder by The Smiths (1985) Buzzsaws and baying cows drape an eerie waltz as Morrissey murmurs that meat "is death for no reason / and death for no reason is murder." It remains pop's most *bracing statement about animal rights: "People tell me they became a vegetarian as a result of 'Meat is Murder,' " guitarist Johnny Marr said last year. "That is quite literally rock music changing someone's life."​
Continue…

So, who is the winner and will we ever see another one for sale? Got outbid, as always

Promo copy of Morrissey Live At The Hollywood Bowl. This was originally meant to be released in 2008, but was cancelled at Morrissey's request 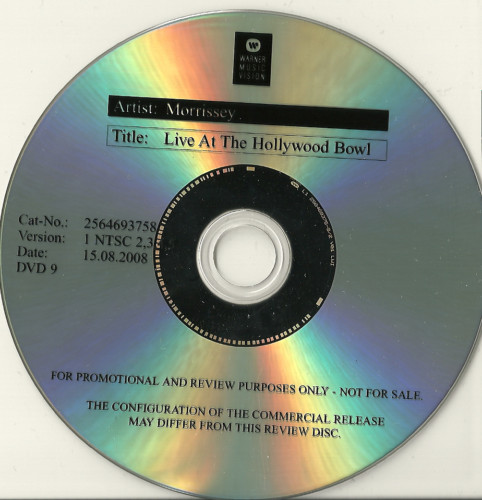 Calling all Morrissey fans! For the release of Glamorous Glue, Morrissey's label have issued a set of promotional 7''s which are completely unavailable in the shops. I've received one from a completely genuine source within the industry and currently have it available for sale on ebay. I'm told there was only 150 made so this is very special indeed! For all those that might be interested, the link to the auction is below, happy bidding! 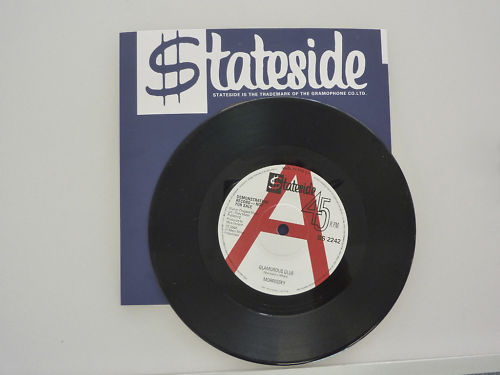 The 7'' is in mint condition and is unplayed. It comes in a special card sleeve with a nice looking 'retro' design on the rear, tracklisting is below, the B side is an old Vince Eager track which I'm told was a tongue in cheek selection by Morrissey himself!!

The product listed is available only for purchase in the UK stores listed. You are advised to check with your local store as to availability as not every store will stock all titles.

Product may be made available outside of the UK dependent upon record label policy and you are advised to contact your local record store.

The Smiths
The Queen Is Dead

10" LP. Re-print of The Smiths masterpiece The Queen Is Dead. Lovingly re-worked onto 10" by master vinyl-cutter Frank Arkwright, the record served as a blueprint for thousands more to come and its poignant social and political musings are as relevant today as they were 30 years ago.

Boz "writing a new album with Morrissey" according to Adam Ant

Adam Ant has worked with Boz Boorer (intermittently) for [correction - 20] years now. He has co-written the forthcoming album "Adam Ant Is The Blueblack Hussar In Marrying The Gunner's Daughter".

In an exclusive interview with Music Week Adam has announced that Boz hadn't the time to play with Adam at the Under The Bridge gig because...

Boz is working on a new album with Morrissey!!

Threats for Smiths on Irish tour

As part of the ongoing changes, from now on the site previously known as "Morrissey-solo.com" is changing to "MorrisseyLoversUnited.com". Please change your bookmarks accordingly.

This change signifies a move away from the past site's reputation of negativity in advance of the new releases and tour. Rather than keep the open policy on the site, anything deemed negative or otherwise too critical may be removed from the site at any time. Frankly, I also have wanted to change the name for a while as I have really gotten sick of people using the term 'solow' in describing the site.

Further down the road some changes include most likely getting rid of anonymous comments as many people have requested. One person pointed out a little while ago that "the site was rendered obsolete by Facebook, Wikipedia, and various search engine options." At first I dismissed...
Continue…


Goldmine Mag commentary on why The Smiths belong in the Rock and Roll Hall of Fame:

The Smiths – An Ordinary Name for the Rock Hall of Fame - By Phill Marder, Goldmine​
Continue…

Morrissey Central "THE NEXT DAY" (February 26, 2021)
Without Bowie there would be no New York Dolls and without artists like...
3 minutes ago
gashonthenail
Morrissey A-Z: "East, West"
I like Morrissey's friendly tone of voice. Especially when he sings about...
4 minutes ago
Light Housework
On this day
I normally feel old mentioning the anniversary of Smiths' releases, but...
24 minutes ago
Famous when dead
What song are you listening to right now?
27 minutes ago
Off-topic discussion thread / moved as...
Nice you can respond... as always 💋💋💋 Your salver is most welcome.... as...
Today at 6:11 AM
Carlisle baz
Post Whatever You Are Thinking At This Very Moment
Thought you and ol' skanks were friends? ?
Today at 5:48 AM
rifke