Morrissey Day!
While the musical legend himself is on another sell out UK tour, the British Music Experience is marking his long career by marking 22nd of February as Morrissey Day.

We will have on display part of the collection of Moz superfan Matt Jacobson, author of ‘Pieces of Morrissey: Adventures of the Moz Army’. This collection includes the shirt worn by Morrissey at his Liverpool Empire gig which was thrown into the audience and caught by Matt. We also have the T shirt that was worn by Morrissey in the Every Day is Just Like Sunday video, signed by the man himself. All this sits alongside our permanent exhibition celebrating the influence...
Continue...
Unloveable: A Smiths & Morrissey Valentine's Day (NYC + Nashville)
4 2,587 by mistermarr : Feb 9, 2018 at 3:20 PM

Friends!
Our 7th annual "alternative" Valentine's Day in NYC approaches. Always sold out, always a wonderful night. This year we are taking the show down south to Nashville for a "Valentine's Day Hangover" edition on the 17th.
Hope to see you there!
xoxo
Ravi Marr 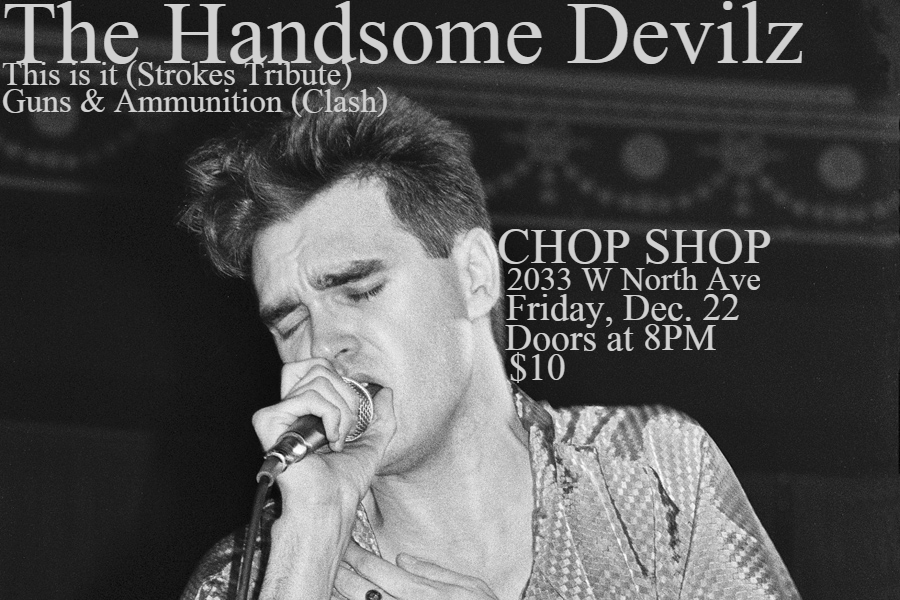 We play a mixture of Smiths and Morrissey songs. (New and old...)

Friends!
Looking forward to returning to the Bell House. Hope you can join us!
xoxo
Ravi Marr

Cemetry Gates: A Smiths & Morrissey Halloween
Belligerent Ghouls!
Meet us at the Cemetry Gates on Friday, October 27th, for a uniquely Smiths & Morrissey Halloween show at our home stage, The Bell House in Brooklyn. Limited discounted "early bird" tickets are available in September only, grab them now at ticketfly. Costumes are welcome, as are gladioli. Special recognition for the best Johnny Marr outfit. We'll also celebrate his birthday, which falls on 10/31.
xoxo
The Sons & Heirs

Hello all you handsome devils,
Even if you are sixteen, clumsy and shy, please join us at our next ALL AGES show on Saturday 8/26 in Williamsburg, Brooklyn at the Knitting Factory. Advance tickets are limited and moving fast.

We are also thrilled to announce our first ever show in Nashville, on Wednesday 8/16 at the amazing Basement East. Tickets moving quickly here too. You've always stayed true to us, so please help us spread the word by sharing with your friends down south.

Following on from the release of Mark Gill's Morrissey biopic England is Mine, I've programmed a weekend of films at the Genesis cinema in Mile End, London. These are films that have inspired the artwork and lyrics of The Smiths or that are, purely and simply some of Morrissey's favourite films.

The schedule of films is available on our Facebook page, where you can also book tickets.

During this weekend, we will also be screening England is Mine with a Q&A with the director, Mark Gill, and there'll be a chance to see the 1987 South Bank Show episode about The Smiths for free, followed by a DJ set in the bar. 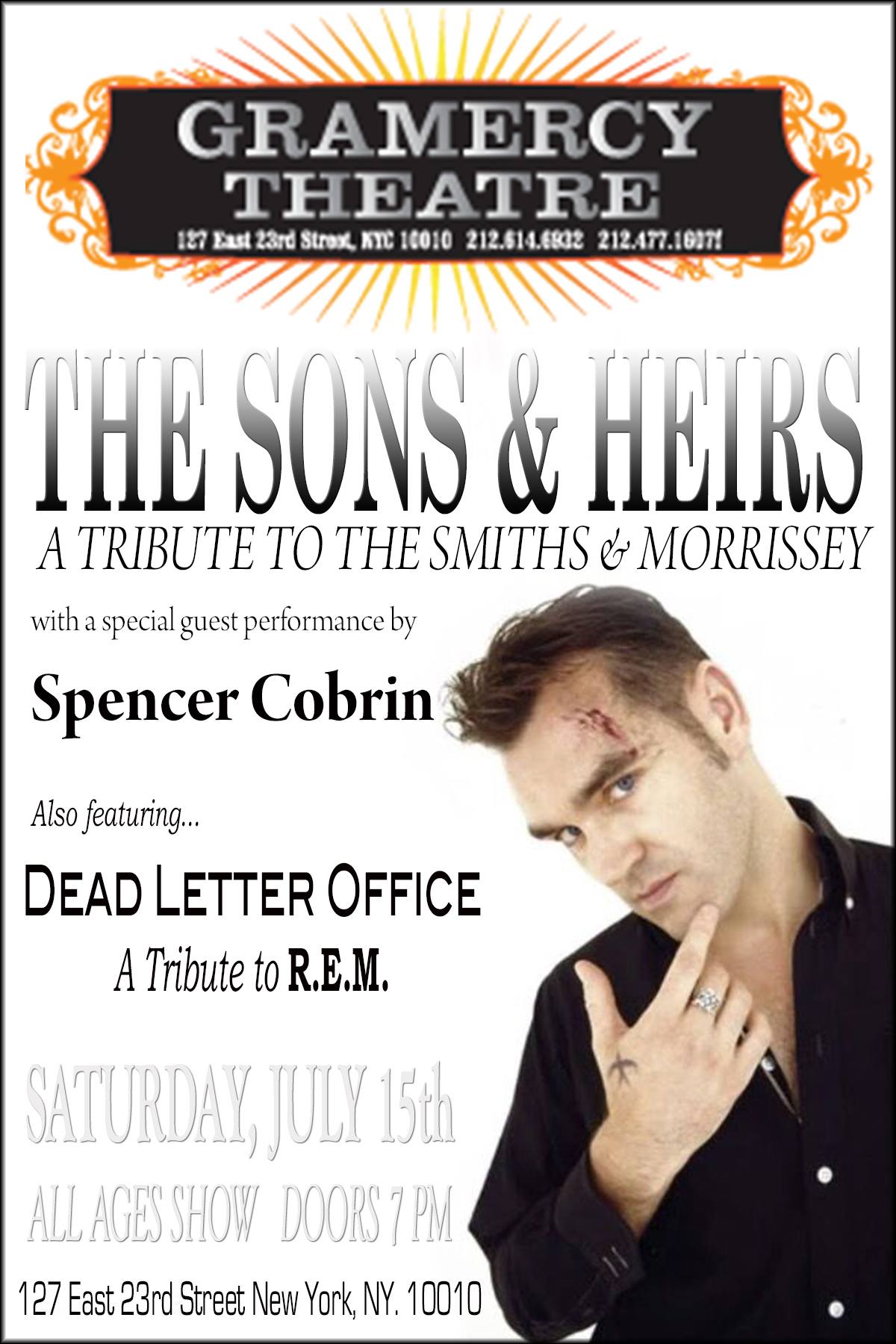 Friends!
Excited to get back to the stage and the amazing Gramercy theater, and thrilled to have our friend Spencer Cobrin joining us.
See details below.
xoxo
Ravi Marr 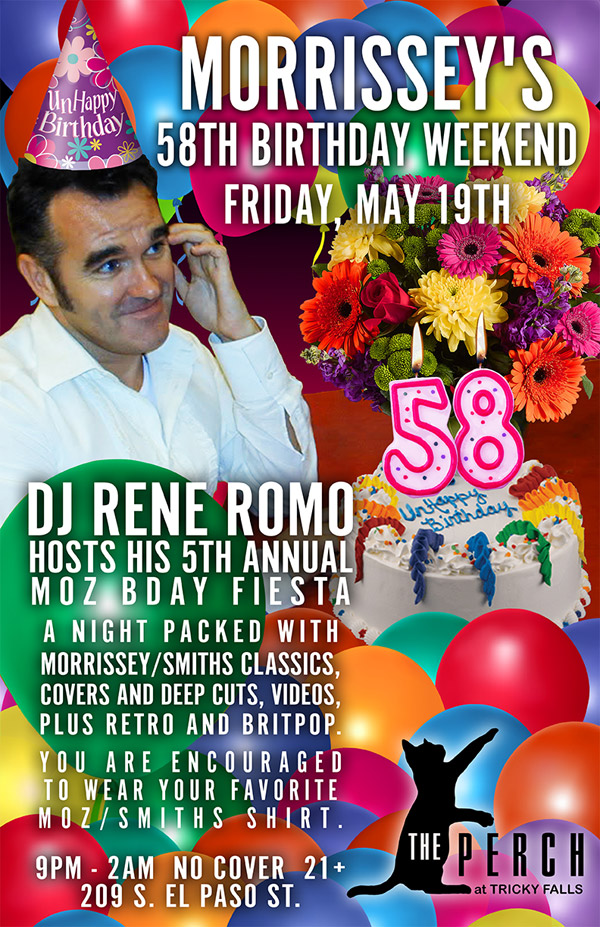 DJ Rene Romo hosts his 5th annual Morrissey birthday fiesta at The Perch above Tricky Falls, in downtown El Paso, Texas, this Friday, May 19. Join us for a night of Morrissey/Smiths classics, deep cuts, covers, videos, plus Britpop, Motown, Rockabilly, and more. "See all (your) old friends and put (your arms) around them." Attention all "Handsome Devils" and "Pretty Girls" in our "(river)side town" of El Paso, nearby Las Cruces, New Mexico, and of course or neighbors across the Rio Grande (before Trump builds his ugly wall) in Ciudad Juarez, Mexico: prepare to celebrate Moz's 58th and dance your legs down to the knees. No cover, 21+, 9 p.m.-2 a.m. As always, you are encouraged to wear your favorite Morrissey/Smiths shirt.
Continue...
Page 2 of 5