Posted by Jesse earlier today and then tweeted by Joe Chiccarelli: 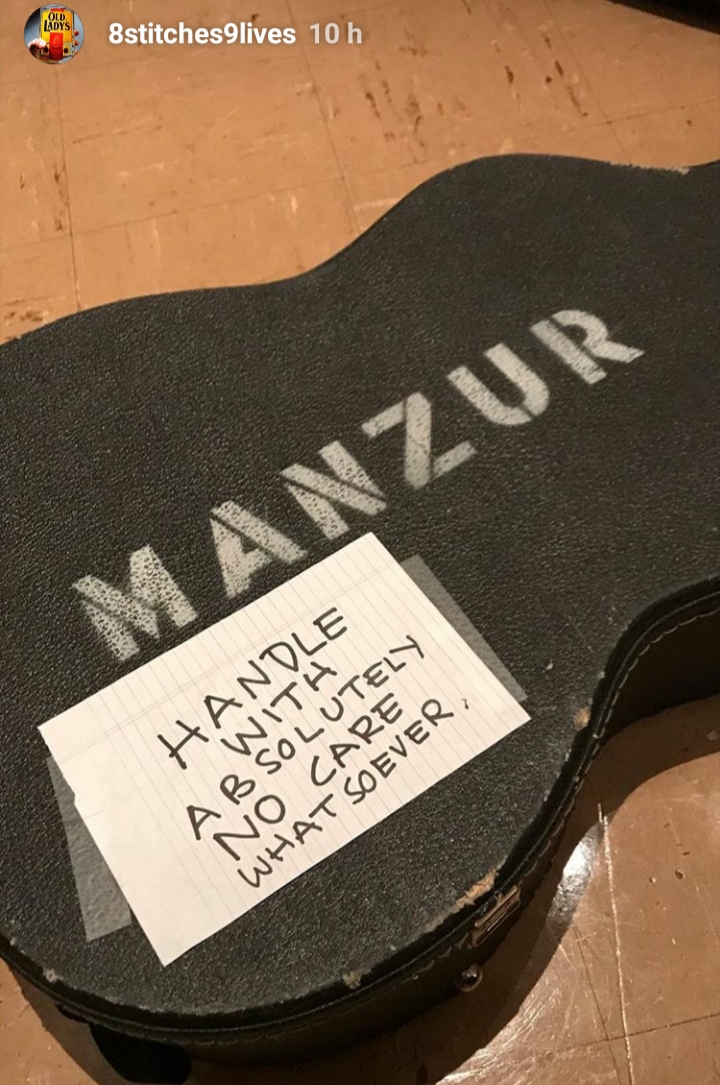 The handwriting looks familiar...
Saw Jesse's post and didn't think to share it as it slipped my mind, but as I've now seen it elsewhere - voilà.
Regards,
FWD.
Continue...
Moz in studio photo with Devon Taylor (sousaphone) and Joe Chiccarelli
186 19,958 by NealCassidy : Aug 11, 2018 at 3:14 PM 
"The Experiment coming out soon. What is the meaning the meaning of life? Recently the brilliant Dean Butterworth tracked drums. Special thanks to Dusty and Justin for tracking. I’m so excited to put out my solo stuff. Please share and spread the word "On Morrissey:
Still don't really know him. He's the only artist I know that wears a Morrissey T-shirt, He literally comes down for breakfast with a Morrissey T-shirt. He's a very gentle vegetarian and that's probably the most untidy hair I've ever seen him have [shows photo]. I mean he would always be perfectly quiffed and just a lovely man who was very shy... I always remember the story, I was in the studio, he would just let me and the band do all the music, he wouldn't come in. I would work on the song with the band and then Morrissey would come in and listen....
Continue...
Morrissey (briefly) mentioned in Telegraph article on Linder's Chatsworth residency
4 2,254 by Peppermint : Mar 17, 2018 at 3:52 PM Punk artist Linder on shaking up Chatsworth: 'It's an odd thing, falling in love with a house' - The Telegraph

It's a 'Premium' article (ie behind a paywall) so I'm pasting the whole thing here.

Morrissey-related excerpt:
"Kind, curious, with something of the sprite about her befitting her interest in witchcraft, she was born Linda Mulvey, before recreating herself during her years on the Manchester art scene. It was here that she began her 40-plus-year friendship with Morrissey, inspiring his song Cemetery Gates. She saw him play at the London Palladium the weekend before we meet, and tells me: “We’re experts in bearing witness for each other,” comparing his performance to Sinatra with stage invasions." When The Smiths were fronted by a 1960s era female popstar - Post-Punk.com

Excerpt:
"Morrissey and Marr having the strong desire to be recognized professionally as great songwriters not unlike Burt Bacharach and Hal David who wrote Shaw’s first hit, began writing her letters asking if she would cover their song I Don’t Owe You Anything, which they had written and composed in the hopes that Shaw would agree to perform it.

Shaw was initially reluctant to accept the offer being averse to the controversy surrounding The Smith’s track Reel Around the Fountain.

Despite this, Morrissey and Marr persisted in trying to recruit Shaw to perform their music, and Shaw was eventually won over by Morrissey’s praise of her in the press by the intervention of Rough Trade label founder Geoff Travis."...
Continue...
Hit songwriter on 'shy' Morrissey (Mark Nevin) - Harrogate Advertiser: interview
29 7,762 by Famous when dead : Feb 23, 2018 at 3:10 PM A restless but likable soul, Mark landed on his feet quickly, co-writing and playing most of the guitar on the former lead singer of The Smith’s second solo album in 1991.

Mark said: “I’d sent him a cassette tape of some of my songs to his home in Manchester and the next day he sent me a postcard saying “Perfect”. “That went on for a while and eventually I was invited to join him in the studio. “He was an odd character. He was sitting there in his glasses with his quiff looking like a Smiths cover, “We all had to eat vegetarian food. He was very shy and awkward, not a comfortable person to be around. “Before I met him I thought he was whinging in an ironic way on his lyrics but he was just whinging.” The end result...
Continue...
Page 5 of 9